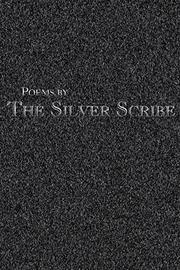 POEMS BY THE SILVER SCRIBE

by The Silver Scribe

These days, anonymity is a curiously conspicuous rhetorical choice for the author of a poetry collection, an effacement that draws attention to itself. However, if this particular nom de plume suggests a certain pretension, perhaps evoking fears of sententious navel-gazing, don’t fear: Fortunately, the Silver Scribe is more tongue-in-cheek than word-to-the-wise. Not that he forgoes moralizing, but the moralizing bits tend to be buried by the cornucopia of quirky occasional poems on subjects that arrest the poet’s flitting interest. In addition to the odd word of wisdom and paean to friendship or the charms of the fairer sex, he writes adoringly, humorously and sometimes quite earnestly of Princess Di, Wayne Gretzky, Ronald Reagan, Marlon Brando, a pigeon named Frank, Hurricane Frances, various friends, Mercury the Cat, Pope John Paul II and Elvis—especially Elvis. The King acts as a minor muse, usually inspiring poems that play on anagrams of “Elvis” in some way, which is about as deep as the wordplay runs. By definition, the poetry is doggerel, but good-hearted doggerel; meaning often plays second fiddle to rhyme: “Maybe you could call me a Jack of all Trades / Yet, in the morning my bed I have always made” or the indecipherable “As you drive around to receive your order / The girl takes your money and dares you to get bolder / But, you just thank her for how she works to get older.” Likewise, syntax often suffers when setting up forced rhymes: “As Pope of the entire World he shared his beliefs / He never thought of anyone as to him beneath.” Ultimately, though, it hardly matters, since this is neither a collection about poetic technique nor the weighty words of a silver-headed sage. As the precisely dated entries (implying an absence of revision) and the inclusion of impossibly personal references suggest, this is a glimpse into a private journal, into a joyful, if sometimes naïve, perspective centered on the belief that rhyming is better than whining and song will never lead you wrong.

An upbeat, life-affirming collection that’s a bit too personal and unpolished for general consumption.