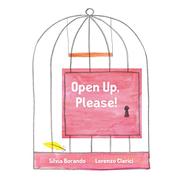 In a nearly wordless escapade, glued-on flaps form cage doors, and lifting them frees a series of grateful animal captives.

Such apparent altruism leads to a disturbing outcome in this latest Minibombo import, though. At first glance, glimpses of feet or other portions, plus hints like a carrot or a perch, invite readers to guess who is in each cage. Then, “Thanks,” say the smiling, very simply rendered mouse, rabbit, squirrel, canary, frog, and hedgehog revealed by lifting each successive flap. Children shouldn’t pat themselves on the back too soon, however. The last “cage” is a solid box (with a line of air holes drilled into it), and lifting its flap—disregarding or not noticing the warning on the rear cover—releases a smiling but silent snake who goes on to cheerfully chase and chow down on all the other creatures. “Thanks,” says the snake, getting the last word. Fans of Kara LaReau and Scott Magoon’s Ugly Fish (2006) and like naturalistic fare may chortle, but more tender sensibilities may prefer Eric Carle’s happier Very Greedy Python (1987).

Good for sparking discussions about unintended consequences—but discomfiting when read without preparation.