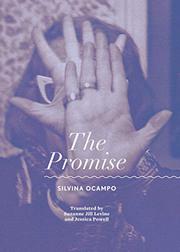 A woman relives the people and places of her life while stranded in the middle of the ocean.

The premise of Argentinian writer Ocampo’s posthumously published novella, which she worked on for the final 25 years of her life, is a grand metaphor for the authorial condition. On her way to visit family in Cape Town, the nameless narrator somehow slips over the railing of her trans-Atlantic ship and regains consciousness in the water, watching “the ship…calmly moving away.” Adrift, facing almost certain death, she makes a pact with St. Rita, the "arbiter of the impossible," that she will write a “dictionary of memories,” and publish it in one year’s time, if she is saved. What follows is an intensely focused series of vignettes in which the characters of the narrator’s life once more walk through their dramas. There's Leandro, a handsome and feckless young doctor with “a face as variable as the weather”; Irene, his intensely focused lover and a medical student in her own right; Gabriela, Irene's obsessive daughter; and Verónica, a not-so-innocent ingénue. These central characters’ stories entwine and begin to form the basis of a tale that includes our narrator—who is present as a voyeur but never an active participant—but her drifting consciousness is just as likely to alight upon less crucial secondary characters like Worm, Gabriela’s countryside companion, or Lily and Lillian, devoted friends who fall in love with the same man because “instead of kissing him they were kissing each other.” As the narrator’s memories progress, and sometimes repeat, they grow increasingly nightmarish in their domestic surrealism. Meanwhile, as all chance of rescue fades, her sense of self is diluted by the immense mystery of the sea. Completed in the late 1980s, at a time when Ocampo was grappling with the effects of Alzheimer’s, the book can be read as a treatise on the dissolution of selfhood in the face of the disease. However, its tactile insistence on the recurrence of memory, its strangeness, and its febrile reality are themes that mark the entirety of Ocampo’s oeuvre and articulate something more enduring even than death. “I’m going to die soon! If I die before I finish what I’m writing no one will remember me, not even the person I loved most in the world,” the narrator exclaims in the final pages. This urgency and despair seem to sum up the central tenet of the artist’s condition—even in the final extreme, the act of making is a tonic against obscurity. Art is the cure for death.

A seminal work by an underread master. Required for all students of the human condition.