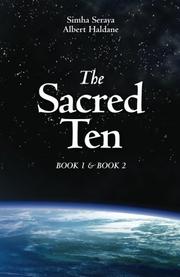 Two spiritual travelers set out to uncover one of the greatest mysteries of all time and discover as much about the meaning of life as they do about themselves.

Trying to uncover a deeper meaning in religious texts such as “The Ten Commandments” has led many scholars on an adventure of the soul and mind; after meeting at Paris’ Sorbonne University more than 30 years ago, authors Seraya and Haldane (Angel Signs, 2002) undertook such a quest. In their new book, they use their vast collective expertise to craft a story tracing a linear thread from “The Ten Commandments” across all belief systems, science and metaphysics. The authors are the main characters in the book, along with their guide, a seraph angel named Yeliyael, and a friend of theirs. By sojourning through history and to other galaxies via space-time travel, their adventure leads them to a plateau of greater understanding of humankind. As real-life experts in fields such as philosophy, religion, metaphysics, linguistics and many historical and ancient texts, the authors have a vast reservoir of knowledge from which to create this story. The tale begins as the authors summon the angel to help traverse history, time and space to visit historical sages to guide them on the path of discovery. Meeting up with great philosophical minds such as Moses, Lao Tzu, Buddha, Benjamin Franklin and many others, they receive guidance to decipher the true nature and meaning of “The Ten Commandments,” uncovering a complex series of coded messages in the text that could change the meaning of life as we understand it. In spite of the complex, heady nature of this tome, it makes for a smooth read. Although the basis of the authors’ overarching theories is scholarly in nature, the writing is accessible. Great care is taken to explain certain motifs and topics early on in the story so the reader may follow along easily later. Using their philosophies to uncover plot points is an ingenious method of storytelling, and the tone of the story is always at an even keel. Even when several major revelations are uncovered, the writers' reverence for the subject matter and their historical characters is always managed with great care.  Equal parts Dan Brown and Quantum Leap; an arresting, fun read, even for those with no deeper interest in religion.