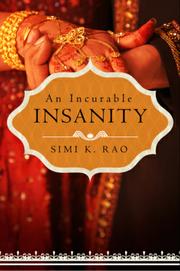 In Rao’s debut novel, an arranged Indian marriage sets the stage for an intimate look at the exasperating madness of love.

Shaan Ahuja and Ruhi Sharma’s arranged marriage has an inauspicious start. Shaan spurns his new wife on their wedding night, still pining over the American lover he left back in Los Angeles. However, the begrudging spouses soon make a pact: Ruhi will stay with Shaan in the United States just long enough to avoid embarrassment. The young bride hopes she can use the time to win Shaan’s heart, and although Ruhi’s beauty and attentiveness do change Shaan’s feelings, his immaturity and inability to express himself—and Ruhi’s lingering mistrust—keep them from reconciling. As they attempt to be “friends without benefits,” they start to reveal their true selves, including her needling puckishness and independent spirit and the reasons for his reserved nature and impulsive jealousy. Their eventual reconciliation comes not from forgiveness but from acceptance and understanding. The novel trades in a certain amount of melodrama that, thanks to its light tone, comes across as indulgent but satisfying. Both main characters are highly animated, with hand-wringing, exasperated gestures and barely restrained outbursts. The novel seems highly aware of its influences, using cultural expectations and delayed gratification in the same spirit, if not with the same deftness, as Jane Austen. Shaan and Ruhi also sometimes mirror the star-crossed lovers from Casablanca (a film that the book directly references). The intense focus on the troubled pair’s relationship, however, takes away from the novel’s other aspects; its settings, including Chandigarh, India, Las Vegas and LA seem sparse and shapeless, their rich cultures highly subdued. The supporting cast, although intriguing, is also underused; in particular, Shaan’s energetic friend Sujoy and the endearing, elderly Sunshine make too few appearances despite the novel’s considerable length.

IF JACK'S IN LOVE
by Stephen Wetta
Newsletter sign-up