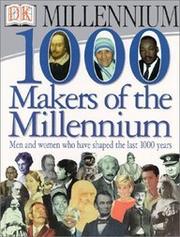 1000 MAKERS OF THE MILLENNIUM

With an emphasis on Western “makers” of the millennium, and, perhaps inevitably, deep coverage of the last 200 years and fleeting coverage of the first few centuries, this volume offers brief biographical sketches of 1,000 people who had an impact on the last 1,000 years. Profusely illustrated and printed on heavy glossy stock, this is a coffee table book for children, meant to be dipped into rather than read from start to finish. Organized chronologically, with a chapter for each century, the parade of people is given context through a timeline of major events, with those of particular importance discussed in special boxes. As with any effort of this kind, there are surprising omissions (the publisher is creating a website for readers’ own suggestions) and inclusions, a Western predominance that grows more pronounced in the later centuries, and an emphasis on sports and celebrity that finishes off the last few decades. The selection can seem highly subjective and provocatively arbitrary, e.g., the US presidents from Nixon back to Teddy Roosevelt are all covered, but none after Nixon. Still, there is a clear effort to include a wide variety of countries and cultures, and this ambitious effort will be the starting point for many historical journeys. (chronology, index) (Nonfiction. 8-12)