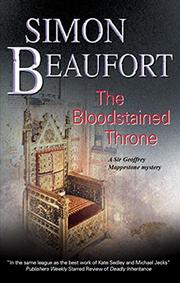 An aspiring pilgrim’s efforts to leave England for a return trip to the Holy Land seem to be cursed.

Geoffrey Mappestone’s fellow Jerosolimitanus Roger of Durham certainly thinks God has cursed their trip, especially when they’re shipwrecked not far from the site of the Battle of Hastings. They’re forced to protect a mixed group of survivors, including two women, Philippa and Edith, who may have murdered the husband they shared, the mysterious Juhel who probably pushed his friend overboard, and the most dangerous of the group, Magnus, a Saxon who claims to be the true king of England. They ultimately seek shelter at a monastery after being chased through swamps by the pirates whose ship they were traveling on. Roger has helped himself to some of their gold as restitution for the loss of his horse. The monastery is uneasily shared by Normans and Saxons, and it soon becomes apparent that Magnus and his half brother, another claimant to the throne, are planning to overthrow Norman rule. Geoffrey is poisoned, villagers are slaughtered and another murder occurs before Geoffrey, who is known for his sleuthing ability (Deadly Inheritance, 2010, etc.), can untangle the deadly plots and escape with his life.

The final score: one clever twist and a truly overwhelming richness of historical detail.