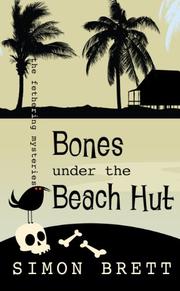 BONES UNDER THE BEACH HUT

The Fethering gals uncover a corpse in a cabana.

Carole Seddon’s plans to amuse her granddaughter at the beach go awry when the cabana she rents in that posh resort Smalting seems to have a problem with its floorboards. Moved to another cabana, she barely has time to introduce herself to the neighbors when human remains are found under her original sublet. Naturally, she rings up her pal Jude. While sipping Chilean Chardonnay, the girls identify a plethora of murder suspects, including a young lady whose boyfriend is missing; another young lady toiling away at a novel; a security guard, lax in his duties, who has an odd arrangement with a pedophilic member of the District Council; the officious president of the Smalting Beach Hut Association; and an elderly couple who know more than they’ll admit to. A few more sips of Chardonnay, and Carole and Jude will discover who those human remains belonged to while a bereft relative walks into the sea, and keeps walking, in remorse.

Not the sturdiest or wittiest of the Fethering series (Blood at the Bookies, 2008, etc.), but fans, perhaps fortified by swigs of Chilean Chardonnay, probably won’t mind.