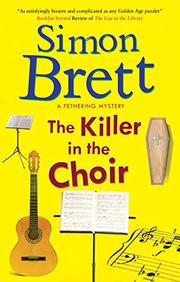 THE KILLER IN THE CHOIR

An unlikely accusation at a wake kicks off the latest case of murder in Fethering, that quaint little village time forgot.

Carole Seddon hadn’t known retired insurance man Leonard Mallett well enough to attend his funeral service out of a sense of personal attachment, but her sense of communal responsibility—she serves on the Committee for the Preservation of Fethering’s Seafront, which he chaired—is rewarded when she’s made privy to his daughter Alice’s passing remark that he was killed by Heather Mallett, his second wife and Alice’s stepmother. The minor scandal that erupts has no impact on the police, who stoutly continue to maintain that Mallett’s fall down his staircase was entirely accidental. Whatever Heather’s role in his decease, she’s amply punished on the night of Alice’s wedding to Roddy Skelton by someone who strangles her and dumps her body into the water, leaving it to wash up next day on that well-preserved seafront. The evidence doesn’t point to anybody in particular, but the title suggests that the guilty party is a member of the Crown & Anchor choir, a group assembled specifically to perform at the wedding ceremony. Given their vast experience in petty homicide (The Liar in the Library, 2018, etc.), it’s inevitable that Carole and her healer friend, Jude Nicholls, would resolve to find the killer. Their insinuating queries unearth several questionable alibis, several more Christie-like red herrings, several revelations of musical misdirection and incompetence, and one serious case of PTSD. This time, though, the plot is as disjointed as this list would suggest, and the denouement comes not with a bang but a bemused shake of the head.

Minor Brett, which is very minor indeed, but still a treasure trove of microgossip.