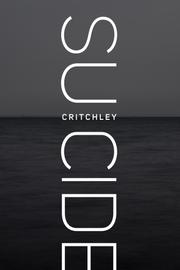 A unique dialectic on the contentious phenomenon of suicide from a noted British philosopher and academic.

Critchley’s (Infinitely Demanding: Ethics of Commitment, Politics of Resistance, 2014, etc.) refreshingly nonjudgmental dissection of suicide begins with his assertion that the act—a dark taboo for many—is neither an offense nor something to be taken lightly. The author seeks to demystify suicide with literary “introspection and empathy,” potential reasoning behind the act, and what is left to be emotionally processed by survivors. When seen through the moral lens of Christian theology, suicide is a sin, he writes, but it is nevertheless a gruesome reality begging to be understood. Critchley’s outlook has roots in his own life: he admits to experiencing his own unmooring depression; “This essay,” Critchley says, “is an attempt to get over it.” He lucidly examines the stigma surrounding the act throughout the ages, referencing the principles of radical freethinkers like 18th-century Italian philosopher Alberto Radicati and poet John Donne alongside viewpoints associated with a belief in God, wherein suicide represents a flagrant disrespect for the gift of life. Fascinating as well is Critchley’s exploration of secular opinions on suicide. With an inquisitive, critical eye, he moves on to scrutinize the nature and enigmatic functionality of suicide notes, with their “mixture of depression and exhibitionism.” Readers will see the final words of Kurt Cobain, Elliot Rodger, and the Sandy Hook shooter, among others. The book’s brevity assists in tempering its often heavy, ponderous discussion. Readers touched by suicide and the unanswered questions left behind will appreciate Critchley’s scholarly perspective and intelligent, well-rounded analysis.

A brief yet erudite and compellingly original survey that will provoke both personal thought and lively group discussion.