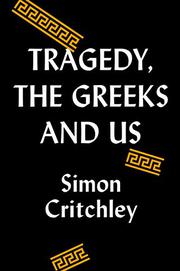 TRAGEDY, THE GREEKS, AND US

A philosopher examines ancient drama for insights into morality, power, and freedom.

In an erudite reconsideration of Greek tragedy, philosopher Critchley (Philosophy/New School for Social Research; What We Think About When We Think About Soccer, 2017, etc.) asserts that the ancient Greek past offers “a way of questioning and destabilizing the present.” Each generation, he writes, has the responsibility of reinventing classical works in order to rescue whatever “will speak to the present and arrest us momentarily from the irresistible pull of the future.” In 61 brief chapters, each an inquiry, commentary, or meditation, Critchley offers close readings that assume readers’ familiarity with many of the 31 extant tragedies by Euripides, Sophocles, and Aeschylus; iconic playwrights such as Shakespeare, Beckett, and Brecht; philosophical writings of Plato and Aristotle; and critical works on tragedy by philosophers, theorists, and literary scholars from German idealists and romantics to contemporary writers such as Judith Butler, Terry Eagleton, and Anne Carson. Tragedy, Critchley writes, “poses a most serious threat to that invention we call philosophy” because it presents a “conflictually constituted world defined by ambiguity, duplicity, uncertainty, and unknowability.” In tragedy, humans must respond “to demands that exceed autonomy, that flow from the past, disrupt the present, and disable the future.” Gods stand as “the placeholder for a force or forces that exceed yet determine and can indeed destroy human agency. The gods are names for powers not under our control.” Among many unresolved questions about the impact of tragedy on viewers, the author asks about “the inversion of gender roles” in plays centered on the actions of intelligent, courageous women. In rigidly patriarchal Greek society, young men played these roles, and it is not known if women were among audience members. Male viewers, then, were confronted with displays of women’s power as well as overwhelming grief. Were such plays “lifelike,” Critchley wonders, “…or is something more subversive, troubling, and insurrectionary taking place in drama?”

For students of Greek drama, a revelatory contemplation of the theater’s enduring power.