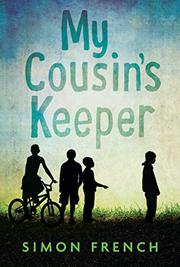 Do you have to be your brother’s keeper?

When his weird, long-haired cousin Bon turns up in Kieran’s hometown to stay with their grandmother and attend his school, it torpedoes the 11-year-old’s hopes of becoming one of the popular crowd. The neglected son of a mentally ill mother, Bon, also 11, has spent plenty of time on his own. He escapes into drawing and writing an elaborate adventure in which “Bon the Crusader,” “Kieran the Brave” and “Julia the Fair” (another new student, living temporarily with the mother who abducted her) vanquish the forces of evil. There are certainly forces of evil about: families that are by no means as loving and supportive as Kieran’s and bullies in the schoolyard. For much of the story, narrator Kieran is not very likable. Caught up in resentment and in his efforts to find a place among the popular, bullying boys, he goes along with their actions. A cruel, unfair attack finally pushes him to do the right thing, becoming the “Kieran the Brave” Bon has imagined. This Australian import, set in a dying small town where soccer is king, stands out for its forthright depiction of dysfunctional families and its effective juxtaposition of them with a functional one.