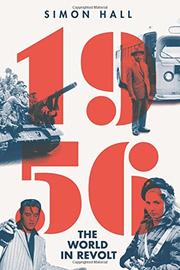 The World in Revolt

A year of dramatic changes around the world.

Taking an ambitious, panoramic view of a single year, Hall (American History/Univ. of Leeds; Rethinking the American Anti-War Movement, 2011, etc.) examines major events in postwar Europe, America, Africa, the Soviet Union, and the Middle East. Although the choice of 1956 is necessarily arbitrary, the author makes a strong case for its significance in capturing “the contradictions of the decade” that played out as liberation movements in some areas and repression in others. In Poland and Hungary, populations rose up against communist oppression; in the U.S., racial violence erupted over efforts to desegregate buses and integrate the University of Alabama. Escorted by police officers and a college dean, the first black student was pelted with “rocks, eggs, mud balls and curses,” leaving her “overcome with terror.” Also during this time, major colonial powers faced the ends of their empires: France tried to suppress uprisings in Algeria, while Britain cracked down on Cyprus but granted independence to Ghana. Flexing their muscles, France and Britain signed an agreement with Israel to launch a war to overthrow Egyptian president Gamel Abdal Nasser, undermining Eisenhower’s efforts to find a peaceful resolution to the Suez Canal crisis. A surprising speech by Nikita Khrushchev, denouncing Stalin, softened the rhetoric of the Cold War. Hall’s focus is almost exclusively political: he devotes only one chapter to cultural eruptions such as rock ’n’ roll, which was condemned as “cannibalistic and tribalistic” and stoked public fears about “errant sexual behavior.” Elvis Presley appeared on TV, evoking “a storm” of criticism; the city of Santa Cruz banned rock ’n’ roll at public gatherings. Hall sees the music as “one manifestation of a wider cultural and generational revolt” that included poet Allen Ginsberg’s “Howl” and playwright John Osborne’s Look Back in Anger. Contemporary newspaper reports give the author’s month-by-month narrative a vivid, you-are-there quality.

An impressive history of a year’s political tensions, necessarily limited in focus but still sweeping and in-depth.