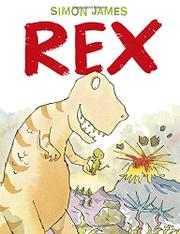 Huge, roaring, toothy T. Rex beds down for the night in a handy empty cave—and wakes with a tiny hatchling theropod staring up at him adoringly: “Dada!” Bellowing, “You’re no Rex!” the discomfited dino lumbers off for a daily round of smashing rocks, uprooting trees, and scaring “every saurus” he sees. But Little Rex trots along and soon is pounding boulders and tearing out (small) trees of his own in imitation. Bonding ensues…and survives big Rex’s frank admission that he’s not Little Rex’s real father. “I hope I’m as terrifying as you when I grow up, Dad.” “I’ll make sure of it,” replies big Rex. “That’s what dads are for!” James never troubles to explain how Little Rex, or more precisely his egg, came to be left in the cave; evidently family arrangements “once upon about 65 million years ago” were fairly casual. Anyway, in splashy, melodramatic cartoon scenes featuring a variety of wide-eyed dinosaurs against a backdrop of erupting volcanoes, James exaggerates the size differential between the two rexes to comical effect, endows Little Rex with a cute overbite, and closes with shared smiles.

A cozy bit of new-family making—perhaps better not taken too literally.