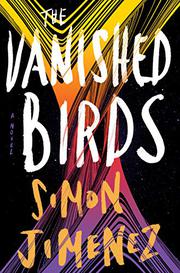 In this gorgeous debut novel, love becomes a force that can shatter space and time.

We first see Nia Imani through the eyes of someone she is always leaving behind: Kaeda, a boy growing up on a backwater planet visited once every 15 years by offworlders who come to collect its harvests. Nia is the captain of a faster-than-light ship that travels through Pocket Space. While Kaeda lives a decade and a half, Nia spends just a few months traveling between various resource-producing worlds like his, shipping goods for the powerful Umbai Company. It’s not until a mysterious boy falls out of the sky on Kaeda’s planet that Nia begins to form a connection she’s not willing to walk away from. The boy doesn’t talk, but he’s drawn to music, particularly a traditional workers’ song from Kaeda’s world: Take my day, but give me the night. Kaeda teaches the boy to play the flute, and the music speaks to Nia. But there’s something else about the boy, something that draws the attention of Fumiko Nakajima, the woman who designed the massive space stations that anchor this corporate-controlled empire. Something dangerous. Something that could change the universe. Spanning a thousand years, this sweeping novel takes the reader from the drowned cities of Old Earth to the vast reaches of Umbai corporate space but always anchors itself in human connection. Even characters whose lives are glimpsed only in passing, as waypoints along Nia’s time-skipping journeys, are fully realized and achingly alive on the page. This powerful, suspenseful story asks us to consider what we’d sacrifice for progress—or for the ones we love.

The best of what science fiction can be: a thought-provoking, heart-rending story about the choices that define our lives.