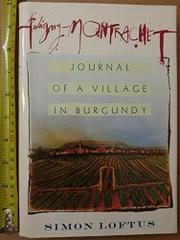 Journal of a Village in Burgundy

Saucy guide to and social history of a wine-making village in France, first published in France in 1988 and then in Britain in 1992. Loftus is a wine merchant, hotelier, restaurateur, and writer of wine catalogs as well of as other books published overseas. Millionaires from around the world, Loftus tells us, vie for tiny allocations of the fabulous, hideously expensive white burgundies of Puligny-Montrachet—wines whose scent is ``a mixture of fresh straw and ripe peaches, an earthy intensity underlying the elegance, suggestions of woodsmoke, of honey and of freshly sawn oak.'' The small, stony vineyards that produce the rival burgundies of the area were first cultivated by monks many centuries ago. The characters of these wines, Loftus says, stem as much from the complexities in temperament of the owners as from variations in the pungency of the soil. The author, a passionate taster, finds infinite gradations in the ever-shifting flavors in vintages (``Ramonet...reminded me of rich quince and apple pie, complete with cloves''). A late burst of sunshine before harvesting, he says, can lend a wine serious promise. Judging by Loftus, rivalry between the local vineyards of small, sleepy Puligny and even smaller nearby Chassagne runs deep, with a peculiarly French animus, though much of Puligny's produce is owned and managed by outsiders while Chassagne is still owned by locals. A year in Burgundy with Loftus, when set beside a year in Provence with Peter Mayle, is like comparing a splendid, quite noble vintage to dreary table wine—Mayle lacks acidity, richness of character, and fruitiness. We enter many cellars here—though the cellars in Puligny are above ground because of the very high water table—meet the village folk, and follow the year's rhythms and yields, with sharply etched portraits of landowners and townspeople alike. Lofty but fun, with 34 very fine, personal photographs taken by the author.