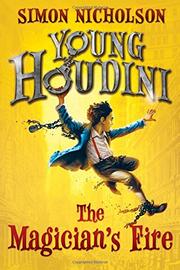 From the Young Houdini series, volume 1

A fast-paced mystery finds Harry, an aspiring magician, and his friends on a quest to find Harry’s mentor, Herbie Lemster, who disappears from his dressing room backstage in a puff of purple smoke.

In this British import, Harry and Billie are street kids, while Arthur is the neglected son of a wealthy businessman who wants to send him away to a boarding school. It’s on Arthur’s birthday that Harry tries his most dangerous magic trick to date, and the three go out to celebrate, intending to wind up at the show in which Herbie performs. Their search begins right after Herbie disappears. The task is made difficult by Harry’s unfortunate habit of leaping into action, trusting that the other two will find him. And there are all too many sinister adults surrounding the three companions. The mystery does get solved, Harry learns a few things about friendship, and Arthur gives Harry his professional name of Houdini. Readers interested in actual information about Houdini should look elsewhere, as except for extremely broad background strokes, this character’s childhood has been entirely fictionalized. Most notably, this character has lived alone in New York after being sent by himself across the Atlantic, instead of spending his boyhood in Wisconsin in an intact family headed by his father, a rabbi.

Middle-grade readers in it for the story alone will gallop through this spellbinder; here’s hoping they go so fast the historical license doesn’t stick.