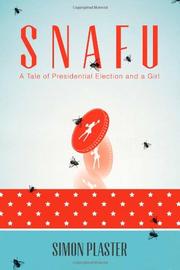 A Tale of Presidential Election and a Girl

A satirical send-up of everyone involved in American politics—the Electoral College, journalists, Democrats, Republicans, and especially the South—poking fun at a culture that takes itself too seriously, from an author who doesn’t.

Though some familiar characters make appearances in SNAFU (including “Slick Willie” Clinton, Rachel Maddow, and “Obamacare statues”), the terrain is comic fantasy, meant to spur laughs rather than argue any particular angle, and to some success. In novelist Plaster’s alternate America, New York Times headlines read: “Court Declares Constitution Unconstitutional, Finally” and “Far Right Wing Extremist Scheme to Destroy Democracy Thwarted by Enlightened Ninth Circuit Ruling,” the latter referring to the abolishment of the Electoral College. The novel follows the distinct courses of four major characters: a Democratic campaign coordinator; a professor whose penchants include scraping roadkill and studying “entirely academic subject[s] that interest him not at all” (including the Electoral College); a pea-brained local journalist; and Virgil Carter, a door-to-door salesman who decides to run for county commissioner and ends up vice presidential candidate. Most of Plaster’s tale is set in Okmulgee County, Okla., and through a series of absurd turns, the year’s presidential contest becomes dependent on the whims of this miniscule, redneck electorate. Though the writing is fast paced and thickly settled with satirical punch lines, the jokes are easy ones and monotonously toned. True, the author doesn’t spare anyone, but he doesn’t spare any opportunity for a jab—clichés and well-worn stereotypes abound. By the end, a campaign with the slogan “Everybody Counts” has resulted in, among other ridiculous snafus, the kidnapping of eight members of the U.S. Supreme Court. The clever narrative structure results in lost focus and tension with so much point-of-view shifting and so many unnecessary details, however laughable. The jokes grow stale, even in this short book, and the caricature-riddled narrative has little to fall back on.

Good for a chuckle, though as its title implies, a muddle, perhaps more accurately reflecting the political system it seeks to satire than the author intended.