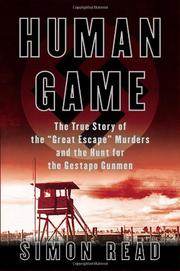 The truth about the murders of 50 airmen who escaped from a top-security World War II prison camp and how the Third Reich's killers were brought to justice.

Read (War of Words: A True Tale of Newsprint and Murder, 2009, etc.) draws heavily on the British Royal Air Force Special Investigation Bureau (SIB) case files to put together the story of what happened after the events portrayed in the 1963 movie The Great Escape. Supposedly escape-proof in design and construction, Stalag Luft III became the holding pen for a multinational contingent of repeat escapees. Six hundred were involved in organizing the plot intended to free 250 from confinement. Read shows how the escape shocked Hitler and the Nazi security services high command, resulting in a nationwide manhunt for the escapees. The men were summarily executed upon capture and cremated anonymously. The SIB detailed a task force of 21 investigators and 16 translators to track down the killers. They identified 72 members of the Gestapo, SS and Kripo chains of command who played an active part in the murders; of them, 21 were sentenced to death by hanging, 17 to prison terms. (Others had died during the war or committed suicide.) The guilty included fanatics like Wilhelm Scharpwinkel, head of the Breslau Gestapo, and Johannes Post, the deputy Gestapo chief and executioner in Kiel. Read provides an admirable record of the meticulous police work involved in accumulating proof sufficient for prosecution and conviction. The RAF detail started from scratch and had to use many different methods to reconstruct personnel and their units and to identify the 72 found responsible.

Fast-paced, clearly written account of how justice was served in a difficult wartime case.