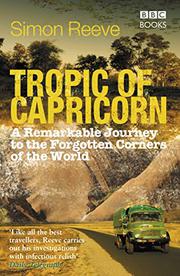 A Remarkable Journey to the Forgotten Corners of the World
by Simon Reeve
BUY NOW FROM
AMAZON
BARNES & NOBLE
LOCAL BOOKSELLER
GET WEEKLY BOOK RECOMMENDATIONS:

British journalist and broadcaster Reeve (One Day in September: The Full Story of the 1972 Munich Olympics Massacre and the Israeli Revenge Operation “Wrath of God”, 2000, etc.) journeys along the southernmost border of the tropics as a follow-up to his expedition for the BBC series Equator.

The Tropics of Capricorn and Cancer bookend a section of the globe that is 3,222 miles wide, “a home to extraordinary natural biodiversity, but an overwhelming concentration of human suffering.” In this region, only Singapore, Hong Kong and Taiwan can claim to have economies described as “high-income.” Aiming to explore the various socioeconomic conditions plaguing this region and to understand the ailments of these lands, Reeve begins his journey in Africa and moves east to Australia and South America, finishing in the favelas (slums) of São Paulo, considered one of the most dangerous places on the planet. Yes, there’s breathtaking scenery en route, but this is travel writing of a sterner sort. The heart of Reeve’s narrative beats in his encounters with the people of Capricorn, including the Bushmen of the Kalahari Desert, Namibian prostitutes, gem miners in Madagascar, Australian Aboriginals and indigenous tribes in Chile, Paraguay and Argentina. He provides a balanced look at their plights and does an excellent job confronting the issues that have wreaked such havoc on this region, including environmental changes, globalization, AIDS and the lingering effects of colonialism. In South America, indigenous tribes who have lived in the mountains for centuries are now being chased off their land with bulldozers. These newly impoverished people will be forced into the slums of the nearest cities while the forests they lived in are destroyed to make way for soy farms producing biofuel. This grimly ironic facet to the world’s sustainable-energy discussion is one of the many disheartening human and environmental issues Reeve brings to light.

An illuminating, readable travelogue and an ethical call to action.