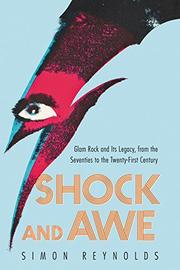 Glam Rock and Its Legacy, from the Seventies to the Twenty-First Century

“In the early seventies, decadence was what we’d nowadays call a ‘meme.’ ” The wide-ranging rock journalist probes the highs and lows of glam.

What was the first glam rock song ever released? Little Richard may be in the running, but for Reynolds (Retromania: Pop Culture’s Addiction to Its Own Past, 2011), the era begins in the later 1960s, when John’s Children began to morph into Tyrannosaurus Rex and then T. Rex, even as hippie Marc Bolan became hippie with platform heels. As the author writes, glam rock—the term is slippery, one of those “you know what I mean” things—was a reaction to the “earnestly uncamp” rock of the era, “when things got heavy and bluesy, rootsy and backwoodsy,” leaving kids like David Jones, soon to become David Bowie, out in the cold. The case of Bowie is instructive: reacting to a complaint from his father that he wasn’t bringing down enough income as a rocker, he divined that he could mix cabaret into his act, even if his first efforts were “deemed too clever for the cabaret circuit.” Then there’s the sexuality aspect of it: gay kids needed a way to rock, too, and in the face of the “drabness, the visual depletion of Britain in 1972,” they found a subculture in shag haircuts, high shoes, and feathers. For Bowie, interested not just in sex, but in its theatrical possibilities, glam was the way forward. With him came lesser bands that sometimes morphed into great ones: Slade, Mott the Hoople, Cockney Rebel, and particularly Roxy Music, whose 1973 album “For Your Pleasure” may be the finest moment in all of glam. Reynolds gets a little gluey when he gets theoretical—“other songs on “Roxy Music” aren’t disjointed horizontally (structural extension through time) but vertically (the layering together of jarring textures and incongruent emotions)”—but for the most part, this is straightforward music/cultural history.

For neo-glamsters, a blueprint for how to get things done; for oldsters, a nostalgic look into a shining, glittery era.