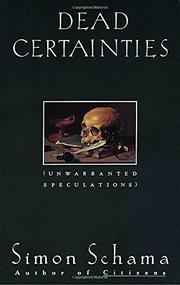 Here Schama (Citizens, 1989, etc.; History/Harvard) compellingly re-creates two historic deaths, both linked to the Parkman dynasty of Boston, by these contrasting re-creations and explores "the teasing gap separating a lived event and its subsequent narration." The first narrative is of the death of General James Wolfe on the Plains of Abraham during the historic Battle of Quebec. Relying on much primary source material, Schama tersely narrates the death of Wolfe from three perspectives; that of an eyewitness, that of fashionable painter Benjamin West (whose portrayal of Wolfe's death was less influenced by a concern for verisimilitude than by a desire to emulate classical models), and that of historian Francis Parkman (who, the author shows, tended to invest Wolfe with his own nervous sensibility and high-strung qualities). Then comes the story of a more obscure death — the alleged murder of George Parkman, uncle of the historian, at the hands of George Parkman's friend and debtor, George Webster. Here, forsaking reliance on historical documentation for a looser, more novelistic approach, Schama tells how Parkman hounded the hapless Webster over some debts, how Parkman disappeared, and how a man who detested Webster discovered the grisly remains of a corpse in the cellar of the medical school in which Webster taught. The agonizing tale of the trial, conviction, and execution of Webster reveals how the judicial process compelled acceptance of one of the competing versions of the truth. Schama laces together the two narratives with an insightful meditation on the essential elusiveness of historical truth and on the need for creative invention in historical scholarship and writing. An imaginative, spellbinding work that reminds us that history is more art than science.