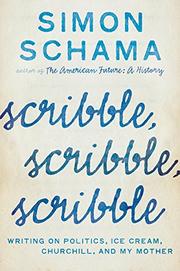 Writings on Politics, Ice Cream, Churchill, and My Mother

It’s a little tough to imagine, say, T.S. Eliot writing at any length on pinball or air hockey, but roll with it: Schama has all the Oxbridge credentials and is a bona fide intellectual, but he’s also a consumer of food, film, art and other less musty pursuits than haunting the library stacks. Here he roams among pursuits, genially and for the most part without undue stuffiness. An early piece in the collection is an account, published in the New Yorker, of a transatlantic crossing aboard the Queen Mary 2, nice work if you can get it; as if channeling George Steiner, Schama sniffs that it is possible, with all the shipboard amusements, for passengers “who may have mixed feelings about the ocean to ignore it.” He makes up for the petulance, though, by providing a quick historical survey of the amenities available to, say, Charles Dickens and anyone with the means to book passage on the luxury liner today. Elsewhere, the author performs an almost obligatory homage to Isaiah Berlin, dean of his generation of scholars and possessor of a sublimely humane intelligence. Scholarly and popular essays on Churchill, Shakespeare and Charlotte Rampling follow before Schama settles down to the poppiest of his pop-culture subjects, namely food, even as he worries that “the sheer ubiquity and quantity of food-wording has…lowered the bar of quality.” No worries here, for the author’s writing on food is fresh and interesting, as are his remarks at the end of the collection on how to train a generation of younger scholars to be relevant, if not employable on television.

A mixed bag, but with rewards for fans of Schama’s scholarly tours de force, such as The Embarrassment of Riches (1987) and Landscape and Memory (1995).