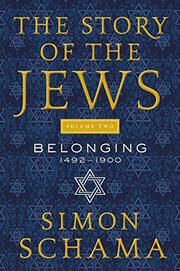 THE STORY OF THE JEWS VOLUME TWO

The second volume of the award-winning author and documentary producer’s history of the Jews.

The narrative moves via elegant minibiographies as Jews expelled from Spain and elsewhere struggled with dispersion and assimilation. Schama (History and Art History/Columbia Univ.; The Face of Britain: The Nation Through Its Portraits, 2015, etc.) pursues the uneasy story of the Jews’ dispersion across the globe after 1492, occasionally finding a haven, such as in Amsterdam or even China, but frequently suffering persistent persecution. In his engaging, stylistic prose, the author proceeds chronologically and delves into fascinating personal stories that reveal the Jewish experience beyond its significant religious figures—e.g., that of the “little warrior prince” David Ha-Reuveni, the “ambassador from the dominion of the Lost Tribes” of Israel who “fetched up in Venice” in 1523 and convinced many Jewish notables of Italy, who were traumatized by the expulsions from Spain and Portugal, that he “was the bearer of something ancient, immemorial, thrown, by God’s design, into modern time.” Facing forced conversions, the Jews of Spain and Portugal headed to the safety of Ferrara in the Po Valley or farther into the Ottoman realm of Suleyman the Magnificent, where they could practice their faith and livelihoods with some dignity. Two “New Christian” sisters, who happened to be among the richest women of Europe, Beatriz de Luna, the widow of a spice king, and Brianda, moved from Lisbon and resettled comfortably in Antwerp only to become embroiled in the perilous machinations of “cultural pluralists.” Other characters Schama vivifies throughout this wide-ranging book include Leone de Sommi Portaleone, the “first unapologetically Jewish showman” of Mantua; the rich immigrant Jews of Galata; cabalist teachers in Safed, Palestine; Jews thriving in the liberal Dutch Republic, some of whom were painted by Rembrandt; and the “citizen Jews” of revolutionary France. While the princes of Europe excoriated the Jews, they also needed them, especially to underwrite their military exploits and luxurious tastes. The modernity of the 19th century would bring both pogroms and Leon Pinsker’s clarion call of “Auto-Emancipation.”

A fluid history lesson from an always engaging guide.