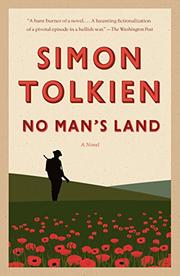 Tolkien (Orders from Berlin, 2012, etc.) draws from the World War I–era experiences of his famous grandfather J.R.R. Tolkien to spin a saga worthy of Masterpiece Theater.

When Adam Raine’s mother is accidentally killed during a violent strike in London, his father, a builder and labor activist, moves them both north to Scarsdale, a small coal-mining town, where his cousin got him a job working for the union. The early part of the book takes place in pre–WWI Scarsdale and presents a nuanced portrait of stolid Edwardian England, its class divisions, economic inequalities, and withering aristocracy. Workingmen suffered—"the mine was cruel and the mine was king"—with life belowground chillingly claustrophobic and always dangerous. Adam’s father is killed saving the life of the mine owner, Sir John Scarsdale, during a riot. Grateful, Sir John, sometimes trapped by an aristocracy that restrains his better instincts, becomes Adam’s patron, bringing him to live in the Scarsdale family home and directing his education. The calculating Lady Scarsdale fears Adam will usurp the place of her younger son, Brice. Adam and the devious Brice become rivals for the love of Miriam, the local parson’s daughter, allowing Tolkien further exploration of social mores, but it’s a thoroughly old-fashioned, chaste romance. As Adam and his contemporaries are drawn into the war and shipped off to France, Tolkien displays much empathy for the working class, most vividly rendered in Adam’s friendship with the miners’ sons on the front lines. Characters become the faces of stoic courage or bitter cynicism as an old society is fractured by mechanized murder. Told chronologically through a narrative that marches rather than soars, the story’s second half relates England’s initial jingoistic war fervor, every able-bodied man pressured to join the cause, but then confronts the ugliness a generation decimated by machine guns, massed artillery, and incompetent generals faced returning home to a jaundiced society. The carnage in the trenches of the Somme is depicted by corpses stacked to serve as defensive emplacements and young lives capriciously snuffed out by the snap of a sniper’s bullet.

A blend of a Dickensian epic and Downton Abbey, with the author arriving at a conclusion that could allow sequels.