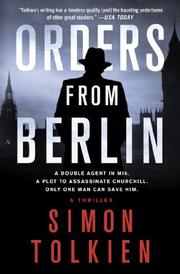 In the early years of World War II, a plot as ingenious as it is outrageous unfolds in London and Berlin.

With Reichsmarschall Goering at his side, Adolf Hitler convenes a military conference in September 1940 to develop an invasion plan for Britain, and something more. Taking Gestapo head Reinhard Heydrich aside, he outlines an entirely different plot focused not on invasion, but on disinformation, deploying several covert agents to target Winston Churchill. Meanwhile, in London, Alec Thorn, second-in-command at MI6, is strangely exhilarated by the Nazi threat. He goes to visit the astute and knowledgeable Albert Morrison, the former head of MI6 who Thorn thinks was put out to pasture far too early. Shortly after this visit, Morrison is killed in a suspicious fall. His daughter Ava, with whom Thorn has a past relationship he is anxious to rekindle, claims that he was pushed. But nothing in the complex case is exactly as it seems, as the young investigator Trave (The King of Diamonds, 2011, etc.) soon learns. When family and the British Secret Service attempt to stonewall Trave, his boss, DCI John Quaid, must intercede, injecting new tension into the relationship between the two men. As the duo dig deeper, they uncover chicanery surrounding the victim's will and the Berlin-based plot not just to confuse, but perhaps to kill Churchill.