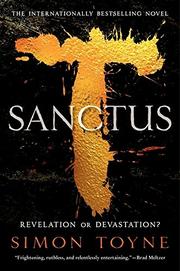 A cliffhanger—literally—that aspires to towering heights but doesn’t quite get there.

Why would a proper monk go climbing out of a mountain lair and then shoot gospel-gang signs at an eager public watching his every move before the face of God? (“The sign he’s making is the Tau,” says one knowing fellow.) Suffice it to say that said monk has a secret involving, of course, a secret library (think Umberto Eco), a heretical gloss on the Bible (think Dan Brown), a tough detective named Arkadian (think Martin Cruz Smith) and a militant order of religious guardians (think Indiana Jones). A few loose phrases of Greek and Aramaic waft through the pages of this debut by Toyne, a Briton resident in France, who packs a lot of well-researched information into this aspirational thriller. If you’re looking to survive a siege, Toyne provides helpful instructions. The timing is off, though; it takes much too long to get to the meat of the story—understandably, perhaps, since it takes our monk a good while to ease himself across the sheer rock face, his progress marked by clerics of sinister demeanor (“Even if by some miracle he does manage to make it to the lower slopes, our brethren on the outside will apprehend him”). Toyne has a realistic bent, however, and the derring-do and scriptural intrigue never get too unwieldy or too unworldly. His characters, too, are well-rounded and credible; what’s not to like about a monk who reads Nietzsche? A bonus: Toyne’s battery of good guys include strong women characters, with no condescension; too many books of this kind treat women as afterthoughts, if not mere love interests. And there’s some nice elaboration of the plot, keeping the reader guessing whether the heretics are good guys or bad, and just when the seventh seal is going to crack.

A promising debut. One hopes for a more tightly structured narrative next time around, but the right ingredients are all here.