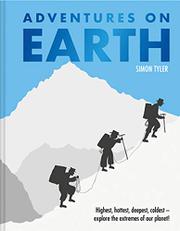 A companion to Adventures in Space (2018) commemorating feats of exploration and discovery while harking back to the grand old days of Eurocentric colonialism.

In serigraphic-style illustrations that, like Lynn Curlee’s, privilege strong forms and monumentality over specific detail, Tyler depicts stylized locales beginning with “Polar Regions” and running from “Mountains” and “Volcanoes” through “Oceans,” “Deserts,” “Jungles,” and “Caves and Chasms.” These serve as backdrops for brief accounts of select “pioneering adventurers,” nearly all white Europeans, which feature lines such as “Samuel and Florence [Baker] followed the White Nile beyond Lake Albert and, in doing so, discovered an impressive waterfall,” and “[Alfred Russell Wallace] traveled through previously unexplored forests,” while offering patronizing nods to early Polynesian explorers and Indigenous Canadians. The author does highlight some modern adventurers including marine biologist Sylvia Earle and ill-fated volcanologist/filmmaker Katia Krafft but fails even to mention (for instance) early Muslim travelers or the 15th-century expeditions of Zheng He. The author also veers off topic in one chapter to plead for the conservation of forest ecosystems. Moreover, the final chapter’s black-on-black color scheme renders human and other forms nearly invisible, and elsewhere the narrative is printed in a small typeface on, all too often, dark blue or green backgrounds that render it barely legible. Armchair explorers can easily do better.

A strain for eyes and sensibilities alike.