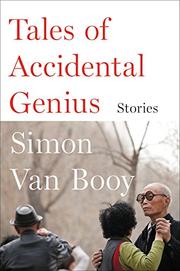 A tenderhearted clutch of stories and fables that highlights interconnectedness between everyone from fashionistas to peasantry, ranging from Brooklyn to London to Beijing.

Van Booy is an unrepentant softie: two of his prior story collections highlight the word “love” in their titles (The Secret Lives of People in Love, 2007; Love Begins in Winter, 2009), and sentimentality runs deep here, too. Indeed, it sometimes overflows. “The Goldfish” is a treacly tale about a man seeking medical help for a dead fish he’s persuaded himself is only ailing and another man’s small act of kindness that spares him sorrow; in “A Slow and Deliberate Disappearance,” a magician visits a retirement home, where a pair of stories he hears about eroding memories fuses in a predictable and old-fashioned manner. Van Booy displayed a similar romanticism in his 2013 novel, The Illusion of Separateness, but that book was redeemed by the depth of its characters. So it’s not surprising that the shorter sketches that open this collection are improved upon by the prose poem/novella that closes it: in “Golden Helper II,” a boy in Beijing named Weng watches his father labor over a mechanical device he’s invented to add speed to the tricycle he uses to make vegetable deliveries; when it proves to be a kind of perpetual motion machine that makes Weng fabulously rich, he’s forced to consider how he can use his newfound wealth to help others and deal with his heartache over the married woman he’s fallen for. The story is formatted like a poem, though it generally reads like prose, and the careful, softened language (“his heart like a kite on currents of breath”) and elemental plot support its billing as a satisfying fable.