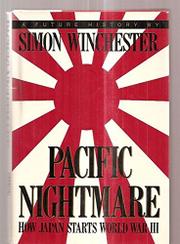 Hong Kong resident Winchester—a Manchester Guardian correspondent whose nonfiction Their Noble Lordships (1982) and Pacific Rising (1991) dished up the House of Lords and the Pacific Rim respectively—treats the breakup of China as future historical fiction. Odd, but it works—and quite well. Presumably because Americans are too busy fearing Japan to have time to worry about China, the publisher is billing Winchester's first novel as being about ``How Japan Starts World War III.'' It's not. It's a thoroughly readable and well-studied scenario for the collapse of China-as-we-know-it following Britain's 1997 handover of Hong Kong to the People's Republic. The disintegration begins with the Peking gerontocracy reneging on their promise to install a native governor in the former crown colony, sending instead a Maoist hard-liner from the puritanical north. The move backfires, thanks to advance notice of the treachery by government dissidents. Meanwhile, a Reuters correspondent—the channel from the progressive wing of the Peking foreign ministry to the departing Brits—makes it possible to prepare a counter strategy, and an ad hoc alliance of the Hong Kong Triads (organized criminals) and Western interests immediately begins to subvert the new rule. The fatal troubles for the Maoists begin in nearby Canton and its surrounding province, where years of capitalist ventures have created an economic boom and a hearty distaste for heavy-handed rule by dour northerners. The shooting of a dissident student ignites the smoldering southern resentment, and civil war erupts. As cities and provinces fall to the new Republican army, long-standing fear and loathing of the communists motivate surrounding countries to begin their own attacks on the panicked Maoists. North Korea falls, and the Japanese begin to look on China as they did in the 1930's, an attitude that does at last lead to direct confrontation with the Americans. Something new to worry about. Absorbing and always, thanks to Winchester's intelligence and firsthand knowledge, quite believable.