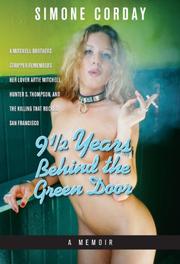 This debut memoir follows a stripper from her first days at the infamous Mitchell Brothers club to the fatal shooting of her lover.

Corday (her stage and pen name) began stripping in early 1980s San Francisco, seeking more freedom and money than her office job allowed. After winning an amateur night contest, the author quickly found an artistic home at the O’Farrell Theater, run by the enterprising Mitchell brothers. Jim and Art “Artie” Mitchell were known for the theater, which was constantly sued or shut down by the police, and for producing the 1971 porn film Behind the Green Door, starring former Ivory Snow model Marilyn Chambers. Early on, Corday began a sexual relationship with Artie, which led to a long-term connection. The author staged several of her own shows at the O’Farrell, including an act where she portrayed then-San Francisco Mayor Dianne Feinstein, who vehemently opposed the club. Corday also befriended legendary writer and longtime Mitchell Brothers ally Hunter S. Thompson, and performed with burlesque and pornography luminaries like Tempest Storm and Traci Lords. The author acted in three Mitchell Brothers porn films, including the long-anticipated sequel to Behind the Green Door. Artie’s constant substance abuse as well as his harem sometimes compromised but never dimmed the powerful bond Corday experienced with her boss, who was shot by his own brother in 1991. The author delivers incredible tales of a strip club post-sexual revolution, offering rich details and historical tidbits. But her writing style is somewhat flawed. Though she has a master’s degree in English, her sentence structure is repetitive and her use of past and present tense inconsistent. She’s also highly critical of certain fellow dancers and performers, often commenting on their weight and her own superiority. In one behind-the-scenes story, Corday refers to a little person as a “freak.” Though memoirists don’t require likability to be compelling, the author’s judgmental attitude and habitual telling rather than showing transform what should be a titillating read into a bumpy experience.

An uneven ride through an intriguing journey of sex, lies, and videotape.