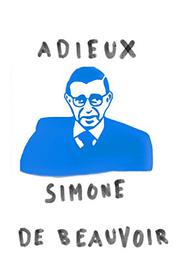 A Farewell To Sartre

Two documentary additions—prosaic, unformed, but substantial—to the Jean-Paul Sartre biography, to the understanding of his oeuvre, to the history of the Beauvoir/Sartre relationship. First comes a fairly brief, inadequately annotated memoir of Sartre, 1970-1980, "based on the diary I kept during those ten years, and on the many testimonies I have gathered." De Beauvoir, a sometime companion in this period, mostly records the ups and downs in Sartre's health: diabetes, slight strokes, dizziness, teeth problems, incontinence, and—worst of all—near-blindness. (In one of the few emotional moments here: "Then he looked at me with a look of anxiety and almost of shame. 'Shall I never get my eyes back?' I said I was afraid he would not. It was so heartrending that I wept all night long."):' Even amid weakness and pain, however, Sartre continued to work on his Flaubert studies, to take on editing assignments for the Maoist magazines, to address workers' groups—in his desire to be "the new intellectual who endeavors to become integrated with the masses so as to bring about the triumph of true universality." (A subtle, curious undercurrent here is De Beauvoir's muted ambivalence about Sartre's final political allegiances—not to mention "his various young women" who kept him supplied with forbidden whiskey.) And the memoir ends with De Beauvoir's musings on the semi-serenity which Sartre achieved in the face of death, on the quasi-suicidal nature of his last illnesses, on the lack of philosophical comfort at the end: "His death does separate us. My death will not bring us together again. That is how things are. It was in itself splendid enough that we could live our lives in harmony so long." The bulk of this thick volume, however, consists of transcripts from 1974 taped conversations between De Beauvoir and Sartre—which "do not reveal any unexpected aspects of him, but. . . do allow one to follow the winding course of his thought and to hear his living voice." Responding to De Beauvoir's often-leading questions, then, an unenthusiastic Sartre talks about: his petit-bourgeois childhood (the hated stepfather, the boarding-school violence); his sometimes-conflicting roles as writer and philosopher (intriguing comments on varying approaches to fiction, criticism, philosophy); individual novels, plays, essays; the influence of Proust, Kafka, Giraudoux; soured friendships with Camus, Koestler, Giacometti, Genet; attitudes toward food, money, and sex—with his attraction to youth ("I find the adult male deeply disgusting"), his relationships with women, his small, ugly self-image. And the conversations turn finally to freedom and socialism (the dual crux of Sartre's politics), death, and God—"a prefabricated image of man, man multiplied by infinity." Repetitious, rarely surprising, enlivened here and there by the often-amusing De Beauvoir/Sartre subtext (e.g., her vain efforts to get him to endorse her version of shared memories): unscintillating but required reading—for students, followers, and other Sartre-watchers.