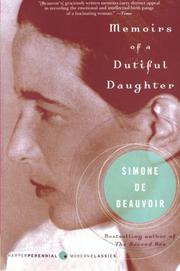 MEMOIRS OF A DUTIFUL DAUGHTER

This autobiography of Mlle. de Beauvoir up to the age of twenty-one is every bit as fascinating as a de Beauvoir novel, largely because she is as absorbed in herself here as a novelist is in his hero and in the same way. From her birth in 1908, through her childhood in a fairly well-to-do middle class family, through her adolescent insecurity, her loss of faith, the beginning of the drive for independence from her family, her decision to become a writer and a philosopher, her years at the Sorbonne, her discovery of the Cult of Restlessness with its consequences for her of loneliness, pride and dedication, to her final year of study, bringing her a sense of direction and purpose,— all is told with a drive and a feeling of personality that is most compelling. There are, in addition, good portraits of several members of her family, of her closest friend Zaza Mabille, of her cousin Jacques with whom she was in love, and of various fellow students at the Sorbonne including Jean-Paul Sartre. Though she passed through many stages that every sensitive and intelligent girl growing up experiences, most of it seems new because of her vitality and her intellectual curiosity. Her novelist's hand is most clearly seen in her self-editing— in spite of writing about herself in great detail, no incidents or people are presented for their own sakes alone but always as a means of furthering the book as a whole. It is a stimulating story of the birth of an existentialist and the coming of age of an extraordinary young woman. Highly recommended.