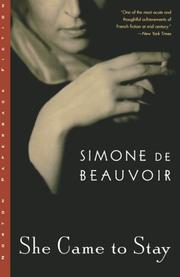 SHE CAME TO STAY

This is the story of an intense, emotional, strained and violent triangle. Pierre, an actor- manager, and Francoise, a novelist, have lived together for a number of years in love and intellectual contentment and confidence, until Xaviere, a young girl from Rouen, comes to Paris "to stay" with them. They try to establish a perfect relationship since both Pierre and Francoise are very much attracted by Xaviere's strange, selfish and demanding personality, and Xaviere wants to possess each of the others and separate them if possible. And while the relationship is physically chaste, there are strong overtones of both a heterosexual and a homosexual nature. The action is achieved through a series of conversations in which they analyse themselves, and each other, and through which Xaviere slowly emerges as something of an intellectual and emotional monster. It is Francoise who decides that the only solution is murder which is given the appearance of suicide. There are, as well, fringe characters who are drawn into the situation which is chiefly an opportunity for Mme. de Beauvoir to air her ideas on men and women, on the nature of love- and hate, etc. And while it is in many ways easier to read than The Second Sex the audience will probably be limited by the fact that the only people who could want to know as much about the triangle as the author tells us are Pierre, Francoise, and Xaviere.