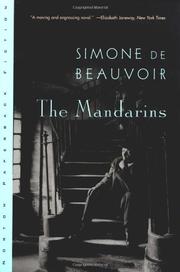 Whether read as a novel of ideas (as is intended) or as a roman a (which it also is), this fascinating long novel is by far the author's best work. It starts at Christmas, 1944, and traces through four years the development among a group of Paris left-wing intellectuals. The goal is to tell how these men and women, united during the war in the Resistance and by the common, necessary action involved, reacted and divided in peace. The story is told in alternating chapters,- half in the third person about Henri Perron, writer and editor of an underground newspaper, half in the first person by Anne Dubreuilk, a psychiatrist (de Beauvoir herself). Anne's husband, Robert, a Sartre-like figure, starts the S.R.L., a movement of the non-Communist left, and persuades Henri to back it with his paper. Then they split over breaking the story of Russian slave labor camps- and an unfounded suspicion that Robert has become a secret Communist. Later they are reunited in feeling that the intellectuals must maintain a position around which liberals who can't swallow either Capitalism or Communism can rally. Besides the political story there are several love stories, one an extraordinary and wonderful story of Anne and an American writer (whom the literary cognescenti will recognize). This is alternately idyllic, passionate, horrifying and tragic — and extraordinarily objective. The picture of America, too, is unusual in view of de Beauvoir's expected attitude. The book offers more than space permits in detail:- political discussion, graphic sex, sharp pen portraits of types and individuals in the literary scene, some travel writing, even a few-episodes of straight action. Despite all this, the novel is not a hedge podge; its parts are well integrated with the central theme. Readers may be divided in their acceptance, but the book is certain of significant critical reception. A certain awkwardness of translation is unfortunate, but despite this, the book — for the initiate- is well worth the price.