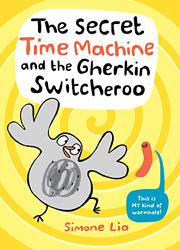 THE SECRET TIME MACHINE AND THE GHERKIN SWITCHEROO

A lie pitches Marcus the earthworm and his avian housemate, Laurence, into a series of daffy pranks and adventures.

The domestic bliss into which the two settled in They Didn’t Teach THIS In Worm School! (2018) is upset when, in a desperate effort to get his chubby layabout companion off his feathered duff, Marcus makes a wild claim that his aunt has invented a time machine. This leaves the worried worm realizing that he must produce, lest he risk a disastrous breakup with his now-excited friend. Fortunately, after discovering that inventing an actual time machine on the spur of the moment is impracticable (go figure), Marcus finds an unexpected ally in Vera, a neighboring bird who enlists other creatures to dress as Robin Hood and company and lay out a sumptuous woodland banquet. Not only is Laurence totally convinced that he’s traveled back in time, so is Marcus (though he wonders why everyone keeps winking at him). Marcus does at last confess his lie, and though Laurence is understandably peeved, the two make up in time to save themselves and some oddly passive slugs from being shot into the sky with a catapult belonging to Mole, a mean bully. As in the opener, readers resilient enough to go with the flow will chuckle over the plot’s surreal set pieces and also the comical cartoons and vignettes that Lia scatters across nearly every spaciously leaded page. By the end, thanks to some couples therapy from Vera, the two are getting along better than ever.