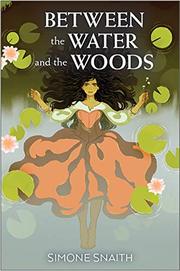 BETWEEN THE WATER AND THE WOODS

Village girl encounters magic, heads to the big city, and meets a handsome knight and steam-carriages.

Sixteen-year-old Emeline lives in a village so small and remote that they don’t even use money, but when she and her brother spot an Ithin, a legendary Dark Creature, they, along with their widowed father, a neighbor, and a stowaway, head to the capital: The law requires they report the sighting to the king in person. Along the way they meet a Lash Knight and become embroiled in the philosophical and political feud between Sapients and Theurgists. Lovely illustrations from Kipin (The Language of Thorns, 2017) elevate this debut but don’t make up for the nonexistent plot (mostly conversation and sightseeing) or the haphazard worldbuilding. Technology ranges from nonexistent to programmable automata; silver is used for bullets and any number of other uses for which it’s likely too soft; magic runs in the Keldare people, but at the same time anyone can join the Keldare. Imagination is on full display, but multiple threads compete to be the central seam, to the detriment of narrative flow. Note that the art depicts Emeline as darker-skinned and love interest Reese lighter; the text focuses mostly on fashion and finance, not skin tone, although some variation is implied.

Original but too sloppily executed for success.