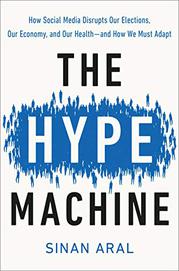 How Social Media Disrupts Our Elections, Our Economy, and Our Health—and How We Must Adapt

The head of MIT’s Social Analytics lab warns that Facebook and other social media titans are controlling our behavior—and that breaking up the behemoths won’t solve the problem.

In 2018, Aral and two colleagues made headlines when they published a study that found that lies travel faster than truth online. Such attention-grabbing facts abound in this survey of what the author calls “the Hype Machine,” or “the real-time communications ecosystem created by social media,” and how it is changing behavior. As the author shows how social networks use “psychological, economic, and technical hooks” to lock in and manipulate people, he makes some points covered in books such as Jaron Lanier’s You Are Not a Gadget. Aral also includes a fair amount of material that will hold interest mainly for marketers or other professional persuaders—e.g., “Digital ads don’t work nearly as well as they’re advertised.” The author shines, however, when he validates or challenges many popular beliefs about social media. Anyone who fears that Russia might use Facebook to disrupt the 2020 presidential election, he suggests, is right to do so—but they should also worry about China and Iran. Anyone who cheered Twitter’s decision to label fake-news tweets should consider two facts: Such labels can also cause readers to distrust true news and create an “implied truth effect” that leads readers to believe that anything not labeled false is true. For all this, Aral argues that leviathans like Facebook don’t need to be broken up but could be reined in by laws that, for example, would increase data portability and allow people to take data shared online to other networks just as they can take their phone numbers to new carriers. Ardent trust-busters may disagree, but Aral’s arguments are clear and stimulating, and as the presidential election nears, the book could hardly be timelier.

A useful, data-rich analysis of how we use social media—and how it uses us.