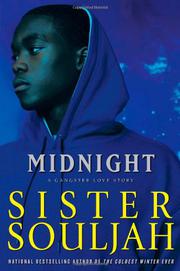 A young Sudanese immigrant struggles to hold onto his traditional values while growing up on New York’s meanest streets.

Fleeing Africa at age seven with his young pregnant mother, Umma, the boy later known as Midnight is not seeking a better life so much as hiding out from the political fallout of his powerful father’s role in the Sudanese government. Adrift without any friends or much money, the once-wealthy family has to start fresh, forcing Midnight to act as de facto patriarch of the clan. They first settle in a Brooklyn housing project, where gentle Umma creates a peaceful Islamic household in a neighborhood that is anything but. Midnight quickly learns to defend himself from the gangsters, drug dealers and other unsavory characters who populate his hood, while protecting Umma and his baby sister Naja. Home schooled, he escorts his veiled mother to and from her sweatshop job, helps her start a lucrative handmade clothing business and studies martial arts at a Japanese dojo. He also purchases two guns, and in his early teens stalks and shoots a shady Jamaican who lusts after Umma. Highly motivated (to say the least), Midnight also excels at basketball and takes a part-time job at a Chinatown fish market to help save up to buy a house for his family in a less dangerous neighborhood. It is in Chinatown that he meets Akemi, a lovely 16-year-old Japanese art student. Their language barrier is no match for their hormones, but Midnight courts her properly, adhering as best he can to his Muslim principles. Obstacles abound for their teenage love, including her rich father back in Japan and the many local young ladies ready to offer everything to the strapping youth. In spite of its interesting point of view, Souljah’s latest (The Coldest Winter Ever, 1999, etc.) reads more like a setup for future volumes than a freestanding cohesive story.

Lengthy coming-of-age set apart by the hero’s African identity, but never is the willful Midnight believable as a 14-year-old.