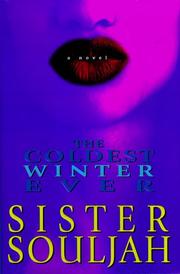 THE COLDEST WINTER EVER

Debut novel by hip-hop rap artist Sister Souljah, whose No Disrespect (1994), which mixes sexual history with political diatribe, is popular in schools country-wide. In its way, this is a tour de force of black English and underworld slang, as finely tuned to its heroine’s voice as Alice Walker’s The Color Purple. The subject matter, though, has a certain flashiness, like a black Godfather family saga, and the heroine’s eventual fall develops only glancingly from her character. Born to a 14-year-old mother during one of New York’s worst snowstorms, Winter Santiaga is the teenaged daughter of Ricky Santiaga, Brooklyn’s top drug dealer, who lives like an Arab prince and treats his wife and four daughters like a queen and her princesses. Winter lost her virginity at 12 and now focuses unwaveringly on varieties of adolescent self-indulgence: sex and sugar-daddies, clothes, and getting her own way. She uses school only as a stepping-stone for getting out of the house—after all, nobody’s paying her to go there. But if there’s no money in it, why go? Meanwhile, Daddy decides it’s time to move out of Brooklyn to truly fancy digs on Long Island, though this places him in the discomfiting position of not being absolutely hands-on with his dealers; and sure enough the rise of some young Turks leads to his arrest. Then he does something really stupid: he murders his wife’s two weak brothers in jail with him on Riker’s Island and gets two consecutive life sentences. Winter’s then on her own, especially with Bullet, who may have replaced her dad as top hood, though when she selfishly fails to help her pregnant buddy Simone, there’s worse—much worse—to come. Thinness aside: riveting stuff, with language so frank it curls your hair. (Author tour)