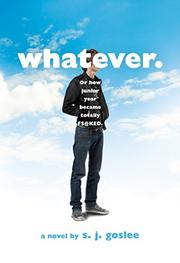 With a close-knit group of guy friends, a cool girlfriend, and few worries, Mike’s junior year is off to a great start. Until it isn’t.

First, the white suburbanite’s girlfriend, Lisa, informs him that they aren’t actually dating. Then he finds out that, while blackout drunk at a party, he made out with a guy. Now everything shifts into unfamiliar territory. Mike can’t help but freak out as he begins to notice how he is thinking about guys, especially Rook Wallace, his enemy since middle school. On top of this, Lisa has wrangled him into running for student government with her, filling his once contentedly slacker schedule with dreaded extracurricular participation. The third-person narrative moves quickly with plenty of realistic teen banter. Risky underage behavior abounds, including a lot of heavy drinking and pot smoking, and is, for the most part, consequence-free in the way that only a story centered on middle-class white kids can be. Mike’s self-talk as he grapples with his sexual identity is at times cringeworthily self-deprecating. Though there are some rough patches as he comes out to his friends, the most resistance he experiences in coming to terms with his sexuality is from himself.

A humorous account of a teen’s reluctant and awkward journey to acceptance of his emerging bisexuality.