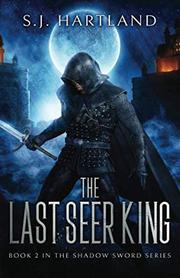 From the Shadow Sword series, volume 2

In this sequel, a lord tries to resurrect a ghoul changeling in a war-ravaged world.

A great battle has ended in a kingdom indebted to an array of gods—and where ghouls attack unprotected villages—with an Isles victory. But ghoul changeling Kaell is dead; Lord Vraymorg is wounded; and the new king, Gendrick Caelan, has forged an alliance with a most unlikely friend: Archanin, the ghoul god. Ice Lord Heath Damadar, continually playing multiple sides of a complicated political game, must bring Prince Aric Caelan, the military commander of the Isles, to Myranthe, Damadar’s sister. She intends to raise the legendary death riders once again. Lord Vraymorg, having been revealed to warriors in the heat of battle as Val Arques, “the king’s man,” who has lived for hundreds of years, attempts to resurrect his charge Kaell with ancient blood magic. Unbeknown to him, his attempt works, bringing Kaell back in the dying body of Princess Azenor. When Lord Vraymorg and Aric are abducted by Damadar at Myranthe’s request, Kaell flees in his unfamiliar body. He is captured by Varee slavers and introduced to the serious and solemn warrior Dannon. Having defeated Dannon in a duel, Kaell, who now calls himself Kate, is made to renounce the war god Khir and swear allegiance to the god of the Varee, at least until he can determine whether or not Lord Vraymorg still lives. In Hartland’s (The 19th Bladesman, 2018) tale of intrigue, the stories of several well-developed characters, all with their own motivations, fears, and destinies, come together to tell the larger, complex saga of this violent, ruthless, war-torn world. (The book features a useful map of this realm at the front and a list of dramatis personae at the back that clarifies characters’ roles.) As in the series’ previous installment, this novel weaves interpersonal battles, political conflict, and fast-paced action into a tale chock full of fantasy adventures sure to please fans of the genre. Though the first novel was very well written, this second volume proves that Hartland is improving as she presses forward, with more convincing characterization and a story that reads smoothly and swiftly.

A triumphant tale that will certainly appeal to lovers of dense, intricate fantasies with strong characters and fully realized worlds.