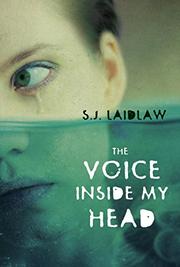 THE VOICE INSIDE MY HEAD

Seventeen-year-old Luke travels to a small island off the coast of Honduras in an effort to find his older sister, Pat, who has been reported dead. Pat had traveled to the island to pursue her interest in marine biology, working as an intern at a shark research center before disappearing. Luke remains certain that she’s alive, and he’s determined to find her. He forms alliances and rivalries with some of the local population, including stoner Zach and the volatile islander girl Reesie. Luke has conversations with Pat in his head—he’s sure he hears her voice, which he feels proves she’s still alive. Laidlaw leaves readers to decide whether Luke really hears this voice and what it might mean if he does, slowly unfolding her mystery. Luke comes across as a fully realized character, but the colorful locals and American expatriates also stand out as individuals. It’s these characterizations that contain the clues, ably supporting the mystery plot. Luke’s quest, his feelings for Reesie and his growing understanding of his sister propel readers through the story.

A satisfying mystery peopled with characters readers will be happy they’ve come to know.