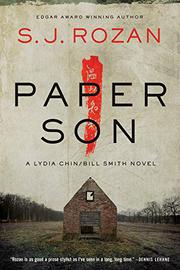 After a hiatus in this series (Ghost Hero, 2011, etc.) that's felt like forever, Lydia Chin’s formidable mother, who’s never approved of her work as a private eye, packs her off to the Mississippi Delta for the best and worst reasons.

The first time Lydia ever hears of her cousin Jefferson Tam is when her mother tells her that he’s been arrested for stabbing his father, Leland, ne Lo-Liang, to death. He was found bending over the dead man, his fingerprints on the murder weapon, but he’s obviously innocent, and Lydia and her partner, Bill Smith, have to exonerate him. Lydia’s pleasure that her mother needs her professional skills, from which she’s always recoiled in the past, is undercut by her own deep reservations about leaving Manhattan for the Deep South. Despite the hospitality of Jefferson’s uncle, the gambler Capt. Peter Tam, Clarksdale feels impossibly foreign to her even though her great-grandfather’s brother Chin Song-Zhao, aka Harry Tam, settled there long ago, masking his identity by the time-honored method of bribing naturalized Chinese-Americans to file false information identifying him as their son. Barely have Lydia and Bill arrived than Jefferson escapes from police custody, eliminating any lingering doubts deputy Bert Lucknell might have had about his guilt. The case immerses Lydia and her Kentucky-born partner in an exotic landscape stuffed with eminently recognizable local types and three generations of knotty family history, appropriately climaxed by an interview with a dotty old lady who has no idea that she holds the key to the riddle. But Rozan is far too conscientious a plotter to settle for detective tourism, and the solution manages to be both utterly predictable in its broad outlines—even the book’s title is a broad wink—and mind-bogglingly complicated in its details.

This is Mississippi, the dazed heroine keeps reminding herself with every new twist. Maybe, maybe not—but it’s a triumphant return of this sorely missed franchise either way.