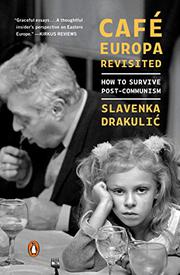 How To Survive Post-Communism

In this sequel to Café Europa (1997), Drakulić admits that Eastern Europeans had a “perhaps too rosy” view of the benefits of unity with the West and the ease of attaining it. Especially since the influx of immigrants in 2015 and 2016, questions of national identity have morphed into a virulent nationalism: “These sorts of ideas used to travel from west to east; now they are moving in the opposite direction, as if nationalization and Balkanization were no longer the property of Eastern Europe alone.” The author often returns to points she’s made before but generally gives them fresh life in these 15 graceful essays in which ordinary people and events tend to become metaphors for larger issues—e.g., the “fantastic” European health insurance card or the “ugly” revival of anti-Semitism on the continent. “European Food Apartheid” begins with EU and other investigations that found that food producers were sending subpar products to Poland, Bulgaria, and other former communist countries but opens out to suggest why Eastern bloc nations feel like “second-class consumers” in the EU. Another essay involves a widowed Serbian immigrant and much-admired shopkeeper in Stockholm whose only companion, a pet parrot, was confiscated by Swedish police when he failed to heed their warning to get a larger cage. The incident suggests why Balkan expatriates may feel like strange birds no matter how assimilated. In laying bare human emotions, Drakulić at times slights the larger political picture—in analyzing Viktor Orbán’s appeal to Hungarians, she fails to note that his government largely controls the media, which gives them a lopsided picture of him—but overall, she’s a fine guide to many aspects of a region poorly understood by much of the West.