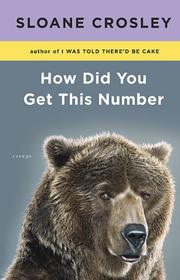 HOW DID YOU GET THIS NUMBER

A worthy successor to Crosley’s well-received debut, I Was Told There’d Be Cake (2008).

Where her first collection focused on a young professional’s life in Manhattan, this follow-up finds the author—whose day job as a book publicist is rarely mentioned—taking her show on the road. She gets lost in Lisbon (actually, she gets lost pretty much everywhere), threatened by a bear in Alaska and all but deported from France—or at least discouraged from ever again visiting Notre Dame. Most of the book is funny, some of it even laugh-out-loud, but her literary gifts go well beyond easy laughs. The humor flows naturally and subtly from characters and situations, as if these were real-life short stories. “An Abbreviated Catalog of Tongues,” which initially seems to be a perfunctory pet essay, yet turns revelatory in a number of directions, addressing everything from sibling relationships to her parents’ religion. “[M]y parents are not big believers in God,” she writes. “Or, rather, they believe in him partially. Which is tricky. It’s like being kind of pregnant or only mostly dead. You’re either in or you’re out.” Perhaps the finest essay is the final one, “Off the Back of a Truck,” a clever, challenging piece from which the book takes its title. Initially about wanting what you can’t afford, it transforms into an exploration of receiving what you want that you can’t afford, through means that you’re only partially willing to admit are pretty shady. Ultimately, though, it becomes a meditation on a romance that forces Crosley to come to terms with a truth she’d suspected and the lie she was living. It’s the least humorous of the collection, but the most unflinchingly true.

Confirmation of the promise shown in the author’s bestselling debut.