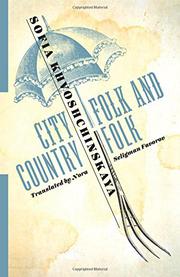 Russian author Khvoshchinskaya exposes class differences and hypocrisies in this rediscovered novel translated into English for the first time.

A self-effacing widow of the rural gentry named Nastasya Ivanovna and her 17-year-old daughter, Olenka, receive an unexpected visit from a well-traveled, self-regarding aristocrat neighbor. Long absent from his estate, Ovcharov has negligently allowed it to fall into disrepair. Determined to spend the season in the country for his health and the purported education of his peasants, he throws the women's household into chaos by asking to rent their bathhouse. Meanwhile, a spiteful cousin with religious pretensions has arrived for an indefinite visit, taken over Olenka's room, and begun turning Nastasya Ivanovna's serfs against her. Ovcharov pens articles about the changing state of Russia and the important role enlightened nobles like himself must play. "Benefit to society—that is our watchword; and we must insist on this benefit, sternly insist." The machinations of a local aristocratic busybody—who wants Olenka to marry her protégé so that she can continue an adulterous affair with him—further complicate the situation. Khvoshchinskaya mocks the pomposity of interfering snobs who expect unquestioning obedience from their social "inferiors" with a light, ironic touch reminiscent of Trollope ("may heaven forgive him the frivolity of his thoughts....And in forgiving Ovcharov may heaven above forgive us all!"). But in her sympathetic depiction of the central mother-daughter relationship Khvoshchinskaya stakes her own territory and widens the boundaries of the 19th-century Russian novel. We learn early on, in an aside, that Olenka was born after "the untimely deaths of eight infants." Worried about her only daughter's potential marriage and "what kind of a fellow" the groom will turn out to be, her fretful mother thinks, "They all seem fine before the wedding."

Set against a backdrop of the emancipation of the serfs, touching on the (assumed) backwardness of rural Russia and the role of its elite in political reform, the book at its heart is the story of two country women asserting their independence.