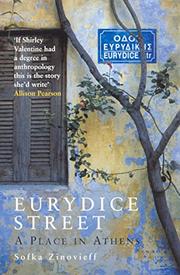 A Place in Athens

A wife and mother chronicles her move from England to Greece.

The author, whose Russian father met her mother on holiday in Greece, grew up in England and married a Greek man. They spent most of their marriage in the U.K. and Russia, but in the summer of 2001 moved with their two daughters to a suburb of Athens. In her debut memoir, which recalls Patricia Storace’s Dinner with Persephone (1996), Zinovieff recounts her family’s first year in Greece. An anthropologist by training, she brings a keen eye for detail to her lovely prose, e.g., a new highway in Athens was “like a soft, steaming slick of black treacle.” The most poignant theme here is the parenting of bilingual, bicultural kids. Zinovieff realized her family was really becoming Greek when, on her birthday, her girls serenaded her with the Greek equivalent of Happy Birthday (“May you live, little Mum, and grow old, with white hair”). She suspected that as her daughters acclimated to their new country, they would sometimes be embarrassed by her decidedly English customs. The difference between her English and Greek selves was captured by a change of name: In English she was known as Sofka Zinovieff; her Greek neighbors transformed Sofka into Sophia, and schoolchildren called her by her husband’s last name, Papadimitriou. By November, Zinovieff had started to feel rather comfortable in her new environs. She decided to apply for Greek citizenship, even though that promised a long tangle with the bureaucracy. Some aspects of Greek culture—chronic tardiness, for example—grated on her. But she appreciated Athens, a city where even the most urban, modern pockets could still rightly be called “neighborhoods.” She enjoyed getting to know her Greek in-laws and celebrating holidays like Easter in Greece; indeed, she enjoyed both the literal and metaphorical significance of having a new name.

More than travel writing, this is a story of finding home.