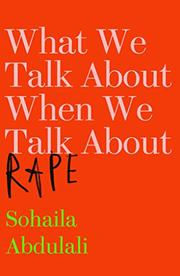 In an expansion of her popular 2013 New York Times op-ed, novelist and rape survivor Abdulali (Year of the Tiger, 2010, etc.) calls for franker conversation about rape.

Modeling discourse about rape that is at once direct and nuanced, unblinking yet subtle, the author tackles the complexities of sexual violence head-on, rightly criticizing simplistic shibboleths. For example, she encourages survivors to talk about their rapes, yet she recognizes that “telling” is sometimes costly and “doesn’t always come with a reward: comfort, closure, justice.” (Abdulali acknowledges that when discussing her own rape, she has sometimes worried that people think she should just get over it.) The author insightfully asks whether the “yes means yes and no means no” model adequately accounts for a woman who “chooses” to be raped over being killed or a woman who “give[s] in” to a man who holds power in her professional world. Abdulali also calls attention to the “institutional…scaffolding” that allows “abuse to flourish”—e.g., the family systems, political and economic arrangements, and workplace norms that deprive women of meaningful agency and that sometimes reward women for going along with systems that are ultimately disempowering. The book is distinguished by its global view; Abdulali includes examples and illustrations from the United States but also from India, South Africa, and Egypt. There’s a little bit of snark and dash of self-help. Spliced throughout are shorter chapters (“A brief pause for ennui,” “A brief pause for confusion”) that offer snapshots of the author’s emotional landscape: a feeling of rage that overtakes her, seemingly out of nowhere, while attending a bat mitzvah, or her envy of writers who get to write about bird song and other happy topics while she’s pondering brutality and violence (“Art! Joy! Life! It’s so much more inviting than discussing getting gonorrhea from one’s older brother or rape as a weapon of war”).