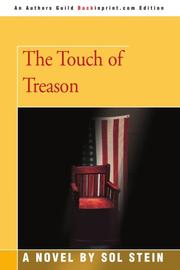 THE TOUCH OF TREASON

George Thomassy, the N.Y. lawyer of Armenian descent who has starred in three previous Stein novels (most recently, Other People, 1979), returns in a murder-mystery/courtroom-drama involving espionage. The victim is 83-year-old Martin Fuller, the leading US expert on USSR strategy and Politburo politics--who, in the midst of writing a top-secret summary of everything he knows, is burned to death by an exploding bathroom heater. Was it an accident? Or did someone fill the kerosene heater with gasoline intentionally? Well, the police go after Fuller's top young protâ€šgâ€š, Ed Sturbridge, a frequent overnight guest at the Fullers' home--and Thomassy, thanks to some meddling by shadowy CIA types, is chosen to be the defense lawyer. At first he seems to believe in Ed's innocence, focusing his courtroom-strategy on suggesting other possible killers (including the KGB) with far stronger motives. But eventually Thomassy begins to realize that Ed is guilty--probably of murder, certainly of treason: there's photographic evidence of Ed's UN rendezvous with a Russian agent/diplomat. So the super-lawyer is soon facing tough challenges to his professionalism: the CIA types are trying to manipulate the trial for reasons involving US/USSR gamesmanship; Thomassy's girlfriend Francine (the rape victim of Other People) turns up as a prosecution witness, putting extra strain on their edgy relationship; Thomassy himself recoils from defending his loathsome client. (The judge privately admonishes him: ""You are in the unusual position of having elected to defend a man whom you have turned against on knowledge of the nature of his actual crime. . . To desert that defendant now, for any cause, would be an act of treason."") And finally Thomassy does his duty as an advocate, keeps his thoughts--""that word, advocate, ladies and gentlemen, sticks in my fucking craw""--to himself. . . and wins acquittal for a ""devious lying conniving ultimately thoughtless human being."" There's minimal suspense here, with the reader always a few steps ahead of the implausibly naive Thomassy; the ethical issues involved aren't firmly dramatized (or balanced) enough to pack the intended wallop. But, with none of the literary pretensions that made Other People so overbearing, this is initially intriguing, subsequently serviceable melodrama--at its best in the nuts-and-bolts courtroom pyrotechnics, a good deal creakier when pounding away at its themes.